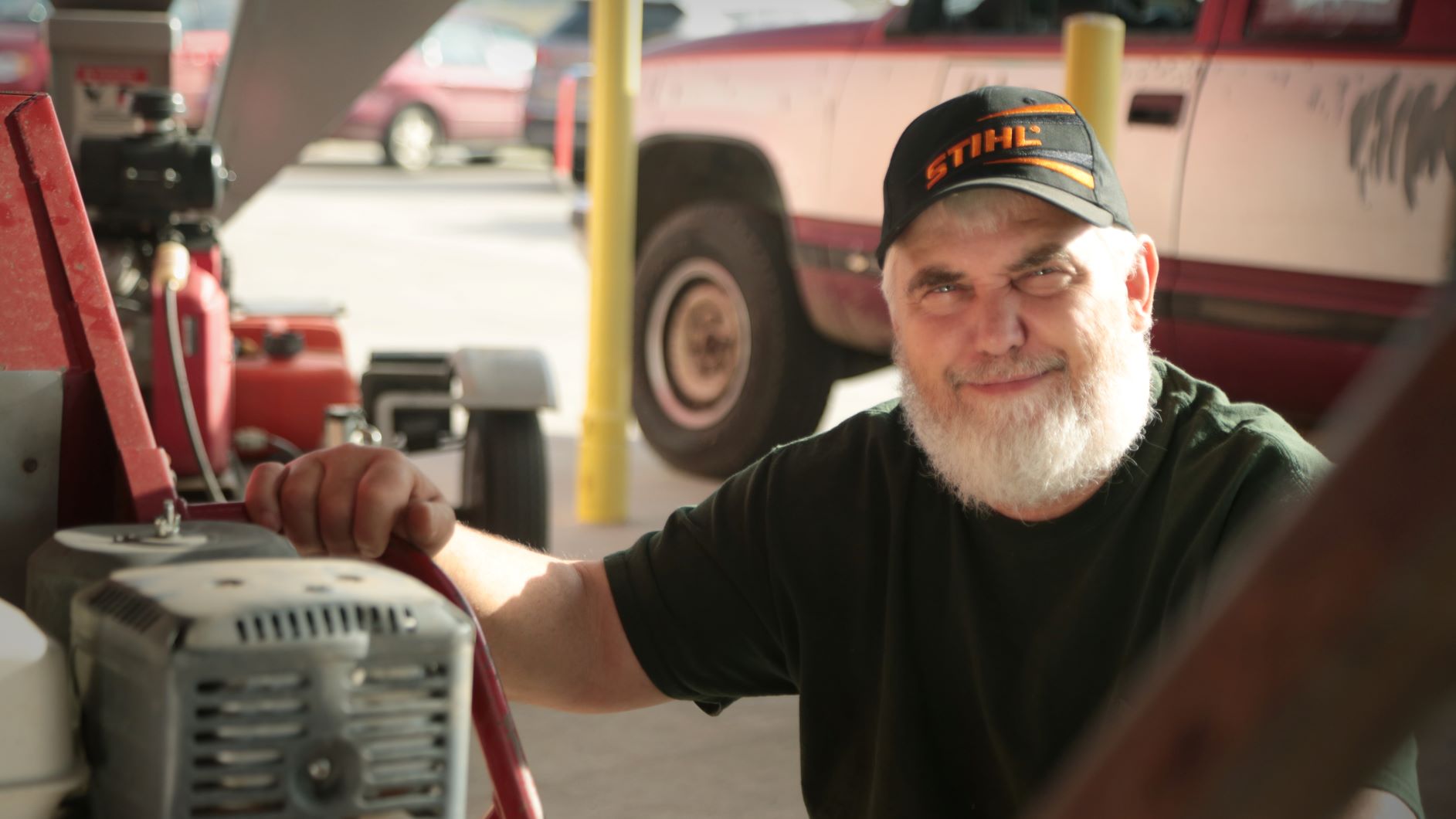 Craig Helberg has always had a knack for fixing and repairing things.

Even as a child, he was constantly taking things apart, figuring out how they work, and putting them back together. It wasn’t until many years later, when he had a wife and family of his own, that he realized this was more than just a hobby, but a talent and passion that would drive him throughout his life. 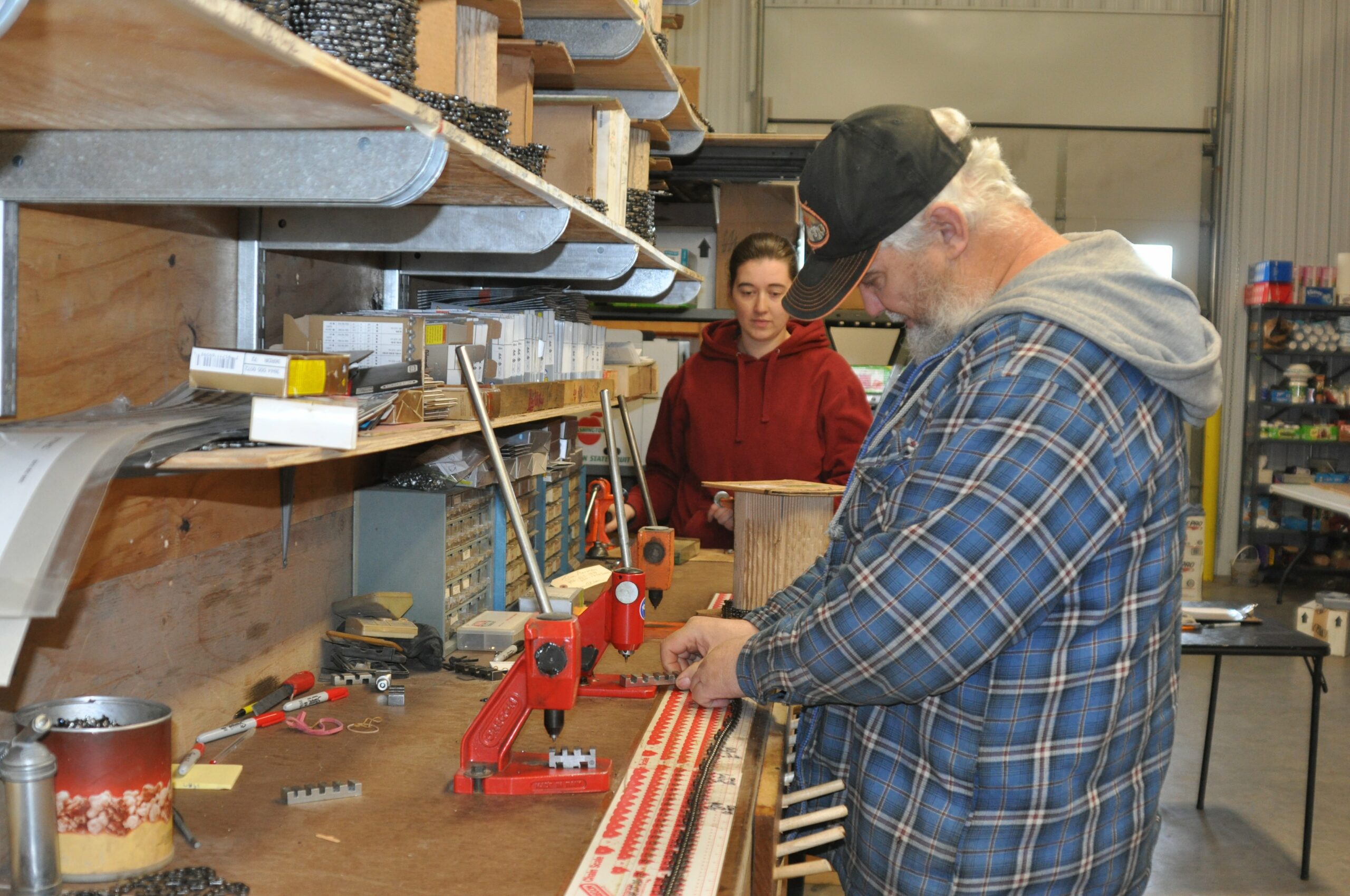 Since he was a kid, Craig Helberg has always had a love for fixing things

When Craig first started working at a rental and repair shop, it seemed as though he had every person in the community of Williston as his client. It was while he was working here that a friend suggested that he open his own business. After that, another business owner friend offered Craig the opportunity to use one of his bays at his store. It wasn’t long until Craig started Craig’s Small Engine Repair in this bay with just his homemade bench and tool chest.  It wasn’t much, but it was all Craig needed to do what he loves.

This business, created to simply provide for the family, soon became much more than that; it became a means in which their family could grow together, learn together, and strengthen their relationship. As Craig’s business began to expand and grow, he decided to invite his wife, Rena, and his 12 children into this endeavor. Craig and Rena, along with their children, decided to take a broader approach, focusing on engineering, installing, designing,warranty, manufacturing, repairing, diagnosis, and everything in between. “[Craig] has a talent for figuring things out,” Rena boasted. “That’s what we built the business on: that we would attempt to fix anything.” Today, they have expanded their services even more, providing education on several of their products and certifying their business as a STIHL Service and Warranty Center.

Craig and Rena Helberg and 9 of their 12 kids, who all joined the couple on their business endeavor

Things were going well for Craig’s Small Engine Repair until his expansion needs couldn’t be met. Stuck in a facility far too small for their services and customer base, Craig and Rena called a family meeting and proposed a new adventure to his team: building their own facility. With careful thought and prayer, Craig and his family decided to take this leap forward in their business and pursue this opportunity to expand and build their own. Within that week, they were contacted by a representative who was able to offer them a steel building package. Despite any obstacles, it was evident that this was the route that Craig’s Small Engine Repair was supposed to go. 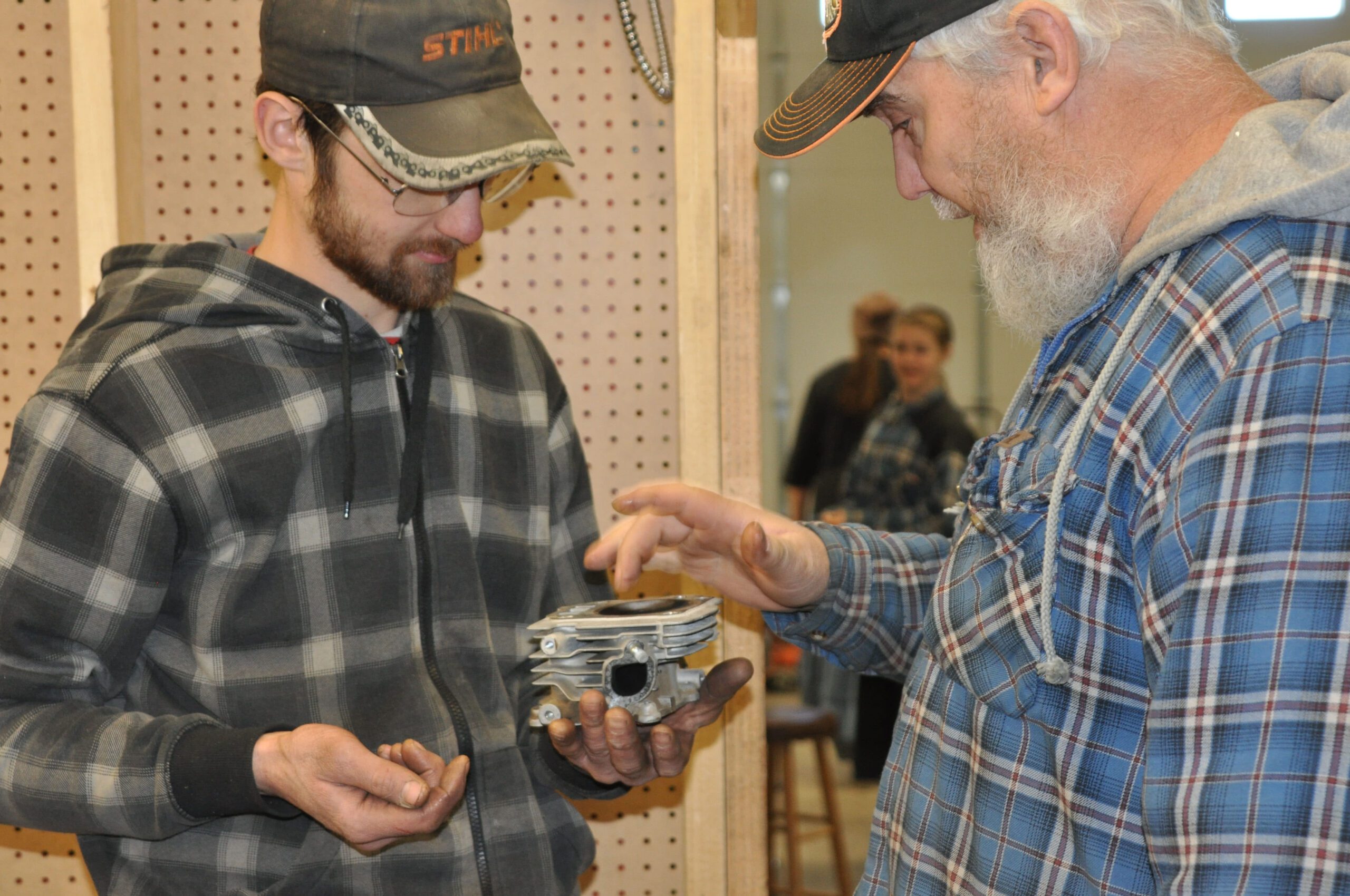 ”It seemed like as some doors were shut, others became open to go ahead and continue with the building. One thing fell into place after another…”

The only major setback throughout this entire expansion project was financing. However, as with other obstacles, the doors for Craig and Rena continued to open; this time, through the Small Business Administration 504 small business loan from Dakota Business Lending and First National Bank & Trust. This loan offered Craig’s Small Engine Repair the fixed, below-market, long-term interest rates that they needed to make this expansion possible. “This program helped us realize that, what we had considered as just having some dirt and some dreams, was going to be possible,” Craig and Rena explained. Working through one of the coldest winters and wettest springs in ND, Craig and his family began building their new facility from the ground up.In just under 5 years, they were able to have their grand opening on Craig’s Small Engine Repair’s 30th anniversary.

Since the expansion, business has continued to increase with the modest growth it has historically shown throughout its three decades in business. Due to the better accommodating space, every employee now has their own tools and work area, allowing them to work more productively, efficiently, and in a streamlined manner. As a result, the business can operate with greater productivity and efficiency. And the Helberg family could not be any prouder. “It was a long, hard road to get here…but it was a good move for us. We are streamlining things so we can handle more equipment and not get so backlogged…. we’re pleased in every respect,” Craig and Rena said with a smile. 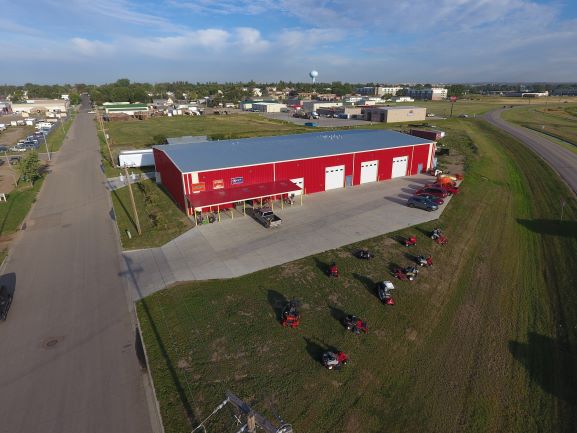 And it appears that the community agrees. Craig noted that the interaction with his customers is a lot smoother, and all of them have expressed their excitement and gratitude for Craig’s Small Engine Repair’s new shop. The additional space truly is what Craig and his crew really needed to take their business to the next level and value their ability to better build on their relationships with members of the community. “We’re so thankful for the people of Williston and the surrounding community of northeastern Montana and northwestern North Dakota,” Rena said gratefully. “They have been sticking with us for 31 years now and providing us with the opportunity to serve them.” This past year, Craig’s Small Engine Repair was awarded Existing Small Business of the Year for 2017 from Williston Economic Development. 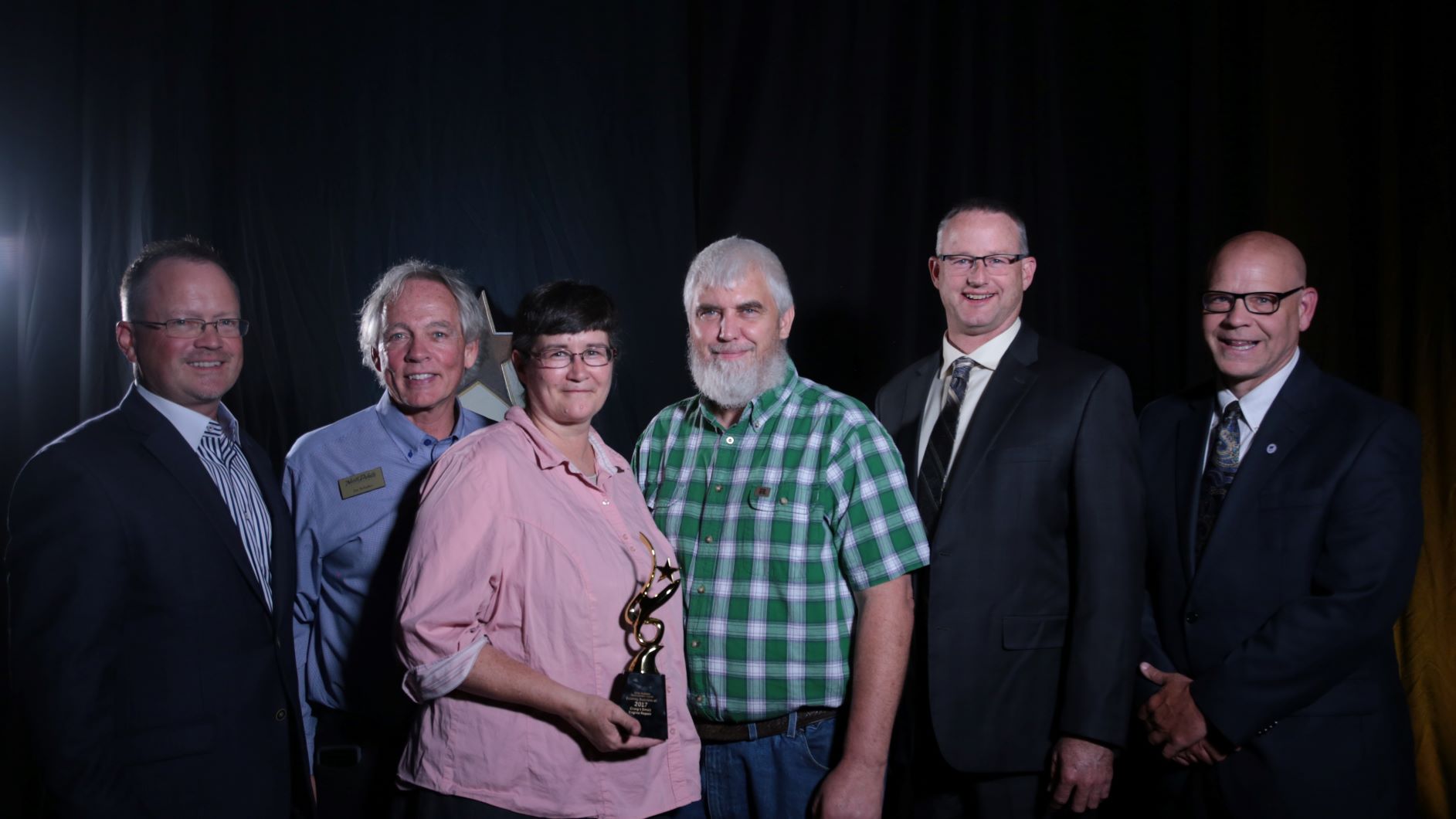 While the interaction with the community is one of Craig and Rena’s favorite part of the business, they both agreed that there’s nothing that can beat working as a family. “It’s probably not for everybody and you have to be able to resolve conflict and be honest…” Rena explained, “but it’s a great opportunity for both personal and family growth.” Craig’s secondary vision was to create a space that can support his children in their future endeavors, providing them with a starting point if they someday had a dream to start a business of their own. This is a testament to one of Craig and Rena’s top values: family. “Family comes first,” shared Craig.

When asked to share any words of wisdom, Craig and Rena stressed one key piece of advice: to find your God-given talent and work hard to use and share that gift with others. “We could not have done this by ourselves by any means. It’s a God-given talent…” Craig explained. ”Do something you have a gift for and that you enjoy doing. Then, just have faith and know you will make it.”

Craig, Rena, and their family look forward to many more years of serving the community of Williston and beyond. They like the pace they are growing at and love the work they do. 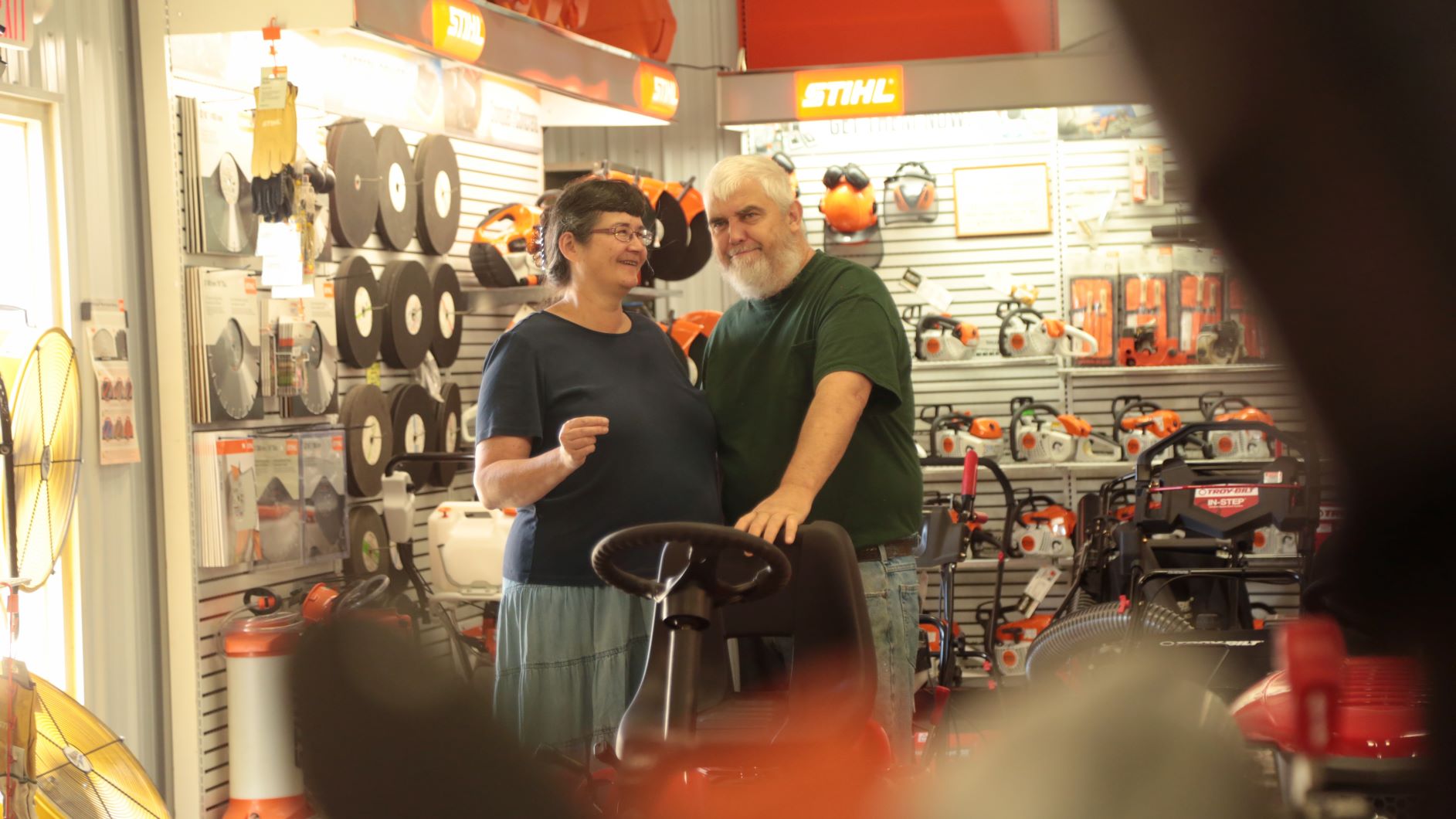 For Craig and Rena, “family comes first.” It’s fitting that these two work together as a team in the business

“We hear all the time that people are just glad we’re here. We’re happy to be able provide for the community. We’re been here for many years and it’s something that we want to continue doing as long as we can.

For more information on Craig’s Small Engine Repair and the services they provide, visit their website (https://craigssmallenginerepair.stihldealer.net) or watch their award video below!

This article was written by Dakota Business Lending with permission from Craig’s Small Engine Repair and is not to be edited or redistributed without permission.