“Handmade patties, cooked with a nice seasoning; fresh buns and fresh spiral cut potato chips. Are you kidding! Pair that with a beer of your choice and it doesn't get any better.”

This is just one of many common reviews found on Yelp about the Fargo-based, beer and burger restaurant known as JL Beers. At its birth in 2009, JL Beers was a single, 900 square foot bar in downtown Fargo. The small pub, started by Randy Thorson and Warren Ackley, was named after the late, Jim Lauerman, owner of Lauerman’s Bar around the corner from the original JL Beers location in downtown Fargo. Today, the small chain of restaurants has grown to a franchise with 10 different locations in three different states.

With each having more than 25 years of experience in the restaurant and bar business prior to starting JL Beers, Thorson and Ackley amplified their knowledge by traveling across the country, reviewing several different burger concepts, and researching the specialized equipment that they were going to use. A combination of learned skills and new innovations resulted in what is JL Beers.

“We started JL Beers out of our own pure enjoyment of craft beer and burgers,” they said.

The small and engaging atmosphere makes for a unique customer experience. JL Beers offers exceptionally quick service and provides an open kitchen environment that allows patrons to watch their specialized way of cooking.  They have a wide selection of burgers, but the most popular is the Humpty Dumpty Burger. “It has a fried egg and cheese on it. You can’t go wrong with adding fresh cut fries or chips and beer cheese dip with it either. Oh, and don’t forget a beer!” says Lance Thorson, Randy’s son, partial owner and director of development. They have 40 different tap beers and a lengthy list of can and bottle options. The staff, trained to know beer, is always able to recommend and pour the perfect beer.

“Our ‘beer advisors’ are very knowledgeable on beer and can assist you in finding something that you’ll be sure to enjoy.” 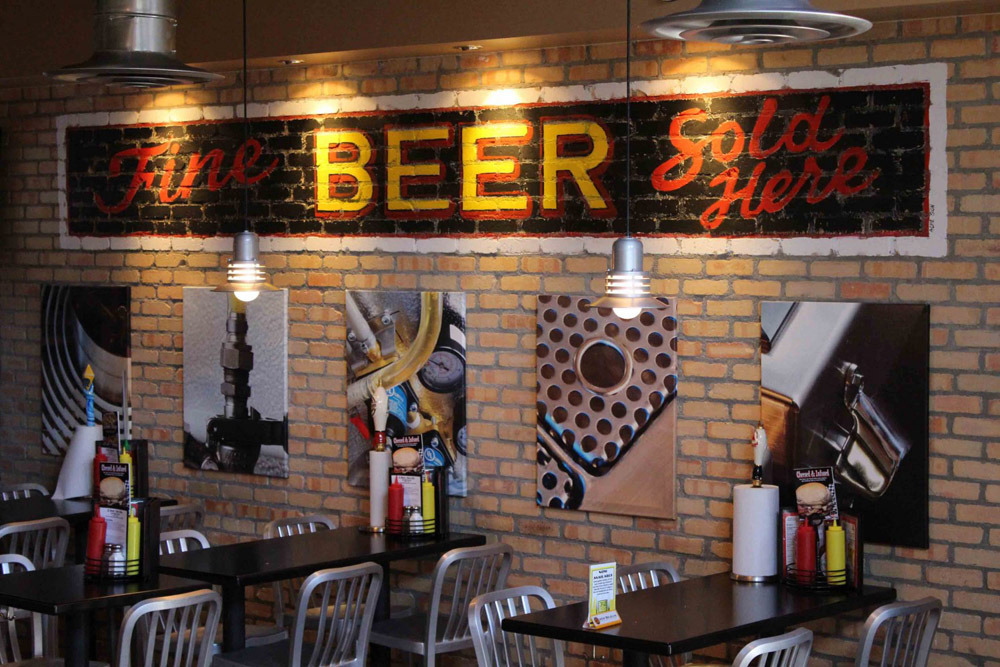 Thorson and Ackley’s research and creative restaurant design coupled with quality goods paid off.  With increasing demand for the scrumptious food and beer selection, Thorson and Ackley decided to expand the business to West Fargo in 2010. With help from a Small Business Administration (SBA) 504 loan through a partnership with Bell State Bank and Trust and Dakota Certified Development Corporation (now Dakota Business Lending), the founders were able to finance the construction of a JL Beers twice the size of the original restaurant with seating available for 49 rather than 24. Only six months after expanding to West Fargo, they returned to Dakota CDC (now Dakota Business Lending) for another SBA 504 loan to open two more JL Beers, one in Moorhead and one in Grand Forks in 2011.

The 504 loan program provided favorable interest rates and the funds necessary to finance their purchase of land, equipment, furniture, fixtures and to finance the construction of the new restaurants. The expansion contributed to 35 additional jobs in each town and higher profits for the business.

“Dakota CDC (now Dakota Business Lending) and our bank are great partners, communicating and working together to assist us with our financing needs,” said Thorson. “Securing a long-term favorable interest rate gave us the security in knowing that our obligations for repayment would remain constant as we continued to grow each business.”

Following the opening of the Moorhead and Grand Forks locations, the business spread to Sioux Falls and Bismarck in 2012. Then, in 2013, JL Beers opened a South Fargo location.

JL Beers has become a big hit in every location. In fact, there is evidence of this popularity. The small chain has won numerous awards for its top-notch service, fresh ingredients, and unique menu items. In 2010 USA Today awarded JL Beers the Best Burger in ND and just this year MSN.com recognized them again with the honor. In the Bismarck Tribune Readers’ Choice Awards of 2014, JL Beers took home five awards including: Best Hamburger, Best Tap Beer Place, Best Late Night Dining, Best Locally Owned Business, and Best Small Company to Work For. These are just a few of the honors the chain has received over the years.

The business is not just receiving awards but also giving back to the community.

“The community is a huge reason why we do what we do. We are obviously passionate about burgers and beer, but they have always been great supporters and patrons of our business.”

In South Fargo, employees raised over $1,500 by saving nickels, dimes and pennies from their tips during 2014. They donated $1,000 of the tips to Sanford Medical in the form of $20 Target gift cards to be given to families in the Neonatal Intensive Care Unit. The remaining $500 was donated to 4 Luv of Dog Rescue, a volunteer dog rescue organization. This type of generosity and giving back has been ongoing amongst the other locations as well.

JL Beers is making a big impact and shows no signs of slowing down anytime soon. The company began franchising in 2013 and the first franchise location opened in Northeast Minneapolis soon after. The company has also recently increased its presence in North Dakota by adding a restaurant in Minot. Thorson, Ackley and their team have come a long way over the years and have a passion for what they do. Lance, who oversees the construction of each restaurant, says,

“It’s rewarding to go from the planning to design stages, to construction, to training a new staff and then, to opening the doors for the first time.”

With a dream, a little help from SBA, Bell State Bank and Trust, Dakota CDC (now Dakota Business Lending), and a lot of determination they have turned the 900 square foot downtown pub into a high- performing restaurant franchise with hopes of continuing to open more doors across the Midwest.

Visit their website to find out more about JL Beers.